For a while, The Cerberus Rebellion has been sitting at 6 Reviews on Amazon and 4 Reviews with 7 Ratings on Goodreads.

So I’ll throw this out there: if any of my readers would be so kind to post a review on their blog or, especially on Amazon or Goodreads, I’d love to send you a copy of the book.

Hit up the contact link and let me know your format of choice and I’ll send you a copy for Free!

As I mentioned in my post on The Industrial Fantasy Age, coal as a fuel and steam power had a profound effect on our world, and can have the same impact on a Gunpowder Fantasy world. Especially in the area of commerce.

Before the industrial revolution, animal-pulled carts and sail and row-driven ships were the only method of moving goods from one place to the next. This limited the range that trade could be conducted, especially when perishable goods were involved. But as steam-power developed, and railroads expanded, commerce felt the impacts.

Roads have always been an aspect of trade networks. Roads allow carts to travel through areas that would be difficult otherwise. As the Industrial Revolution developed, especially in England, these roads became an important part of the network. But maintenance had been the responsibility of individual cities and counties. This led to inconsistent maintenance and sometimes poor road conditions.

Early in the Industrial Revolution, turnpike (or toll-way) trusts began to be established, taking responsibility for long stretches of road. Travelers paid a toll to use the road and those tolls were then used to maintain the road.

A more universal level of maintenance meant a more consistent rate of travel and allowed carts to move faster between cities and transport hubs. Merchants could move their goods more efficiently from the smaller towns to the larger cities and beyond.

Railroads were likely the most major transport improvement of the Industrial Revolution. What had once taken days and weeks to travel by horse or on foot, was reduced to hours and days. Railroads and steam engines also increased the amount of goods that could be carried from one industrial center to another.

For merchants, not only did this increase the speed with which they could move their goods, but it also gave them access to additional markets for their goods.

Sea travel before the Industrial revolution relied either on the wind and the weather or on oarsmen. Speeds were limited and ships found themselves immobilized by a lack of wind.

With the invention of the paddle-wheel (and later the steam-powered screw engine) ships gained consistency, speed and an independence from weather. Commercial trading on rivers became easier and allowed merchants to move their goods cheaper (because they don’t need to pay or feed oarsmen). 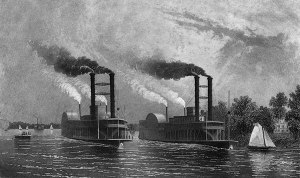 Keeping in mind how commerce will be different in Gunpowder Fantasy will allow you more flexibility in how your nations operate.

In fantasies, merchants are usually important members of society, but don’t have the reach that lords and nobles have. With access to railroads and their improved distribution, merchants become major players as part of your world. You begin to see “railroad barons” develop as they use their power to affect the world around them.

Thanks to everyone for the views, comments, links, and interaction!

So I was researching a random story idea I had, inspired by a friend’s facebook post. In the course of it, I came across this. If you haven’t seen this, it’s super trippy. That’s all I’m going to say.

For the many years that I’ve been writing, weaving some amount of political intrigue or drama into my stories has been a recurring theme. Whether it’s an MC who suddenly finds herself at the head of an emerging third power in a previously two-party system, or the quiet intrigue of nobles as they plot to free themselves from their King.

Traditional Fantasy politics usually follows along the lines of the latter. Knights, Nobles, Ladies, Kings, and Queens vying for power, plotting and scheming against each other.

For a good example of a strong political storyline in Fantasy, look no further than George RR Martin’s Song of Ice and Fire series. But that’s traditional fantasy. Travel in Westeros is slow and arduous; even messenger ravens take days to move notes from place to place. That allows for a much slower, long game form of Politics.

But when you start introducing aspects of Gunpowder Fantasy, especially improved communication, the political game needs to evolve, and it needs to do it quickly.

END_OF_DOCUMENT_TOKEN_TO_BE_REPLACED

A Way With Worlds

After a bit of a break, worldbuilding blog A Way With Worlds is back up and running.

It’s a great resource for worldbuilding information and for ideas on how to build your world.

Just so everyone knows, I do have a facebook page set up at https://www.facebook.com/authorjkjohnson. There’s not much there yet, but I intend to keep it updated regularly with progress on the new books and other Gunpowder Fantasy related information.

When creating a Gunpowder Fantasy world, it’s important to remember a couple of things as far as the technologies that you intend to use, and the industries that support them, when building your world.

The first is the impact that the fantasy aspects of your world have on the industrial revolution in your world.

Having fantasy and magic elements of your world will change how your industrial revolutions begin and grow.

On Earth, coal became a driving force in the industrialization of England, Europe and the United States. Coal drove the steam engines that pushed industry to greater heights. But what happens when coal is never discovered or exploited because the mages of your world suppressed the knowledge of the substance or how to extract it from the mountains?

What if your Elves are of the traditional “naturalist” type but they hold dominion over the lands where coal is the most plentiful, or where the best fields for raising sheep are? Do your Humans go to war with the Elves to secure this territory (and its potential value)? Or do your Elves see the value of the lands they hold and turn into a hybrid of naturalist and capitalist, finding sustainable ways to harvest the raw materials while maintaining the integrity of the land?

Magic and mythical creatures, and how they impact your world, will have direct consequences for how industrialization plays out in your world.

On the other hand, the second is the impact that the industrial revolution has on the fantasy of your world.

In our world the Industrial Revolution took many shapes and forms, and affected different parts of the world in vastly different ways. Some nations saw a boom in mining and metallurgy, while other nations grew their textiles industry. Quality of life improved and commerce exploded.

In a fantasy world, the majority of these effects would be similar. Nations with a strong agricultural base will develop new and better ways to grow and harvest crops, nations rich in minerals will learn how to extract them better, and learn new methods of refining the minerals into metals.

But fantasy worlds have aspects that were obviously not present on Earth during the industrial revolution, and its these aspects that you have to consider when you’re building your world.

For instance, how does the increase of steam power, weapons technology, and even the development of electricity affect magic and its users on your world? I would think that as your world becomes increasingly industrialized, any power that mages once held would begin to diminish as things that were previously reserved only for those with access to magic become available to everyone.

Or how do each of the species of your world react as the others move through their own industrial revolution? What happens when the Orcs of your world begin developing better weapons, faster transportation, and improved supply lines? Will the Elves that live nearby become worried and launch a pre-emptive strike? Or seek out alliances with the Humans of your world?

Worldbuilding is an incredibly interconnected process and remembering to evaluate how each piece of the puzzle changes the others is an important task. 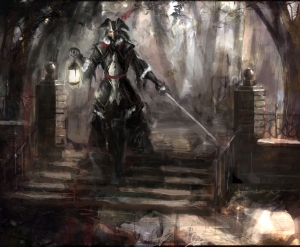 As is wont to happen, an idea for a new story floated through my head the other day. In my defense, at least this one is related to the Griffins & Gunpowder Universe. I haven’t decided if I’m going to make this concept into a series of short stories, weave it in with one of the other planned storylines set on Zaria, or turn it into a full-fledged series of novel.

The main body of the idea was easy enough, but when I got to my protagonist, I realized something: my main character was going to be different than every other Protag I have ever created. My MC is going to be a lowly soldier.

It was then that I realized that this is a common theme in both the Sci-Fi and Fantasy that I’ve read. So maybe I’m just not well read enough, but a lot of main characters are not lowly soldiers. The closest a great deal of MCs get is to be a lower ranked officer.

There are a lot of sub-genres of Sci-Fi and Fantasy that really don’t have this problem, but military themed fantasy definitely does. The closest that a lot of the stories I have read comes to having a “lowly” protagonist is a lower-ranked officer.

So why is it so rare to have a private, or even a corporal, as a protagonist in a story. What challenges does this create? Are there any advantages to have a “grunt” as an MC?

One of the biggest problems that you run into when you write an MC as a lowly soldier is that the character has very little initiative in their activities and no control of their setting. If your story is centered around a conflict, your Main Character is going to spend most of his/her time marching/camping/digging trenches and then there’s the occasional battle. Unless you add in some personal drama, you’re going to run into the problem of having a rather boring.

Another problem is that if you limit yourself to a single character, you’re going to have a limited strategic account of the rest of the campaign. Depending on your setting, news could still be conveyed by general announcements, newspapers, or good-old-scuttlebutt, but you’re not going to be able to convey an accurate picture of the campaign without breaking some rules.

On the other hand, there are some advantages to having a protagonist that doesn’t have as much control.

You can increase the amount of tension with a lowly soldier. The character isn’t going to know what’s going on with the rest of the campaign, they’ll be nervous as they march into battle.

I think that the reason that so few writers have lowly main characters is because it’s a more difficult approach to writing, especially military fiction. Of course, I could just need to read more =D