← No One Searches by Tags
Guest Post – Bones of the Earth →

Starting today, The Cerberus Rebellion will be starting it’s last KDP Select Free Run. It will be free until 10/10 (Wednesday) so if you’ve been looking to pick it up, now is your last chance. Download it here or click the cover below!

For those of you who don’t have a Kindle, I’ll be putting Cerberus up to the other major eBook vendors! 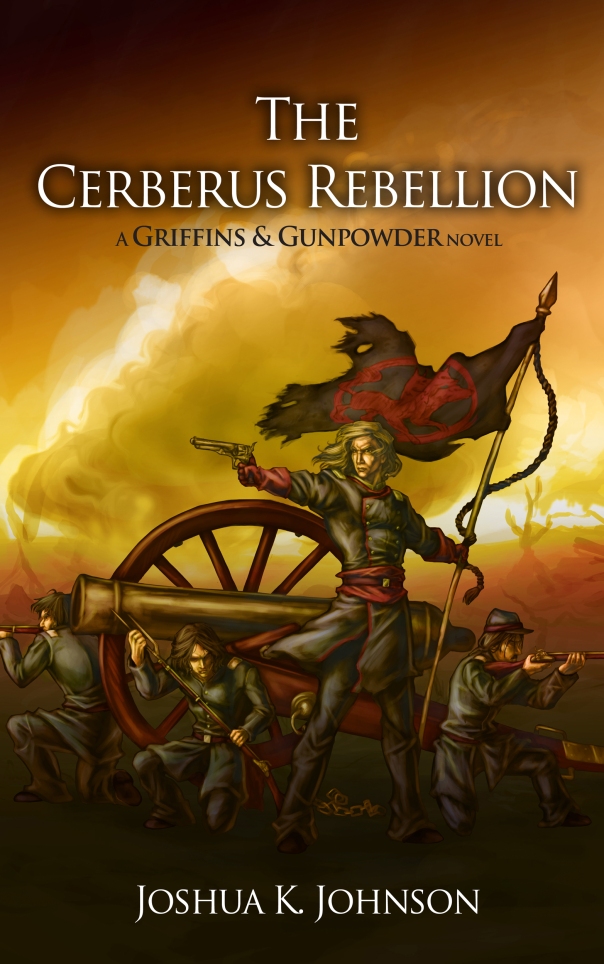 One hundred years of peace and prosperity. War changes everything.

On the world of Zaria, Elves, magic and mythical beasts coexist beside rifles and railroads. The futures of two nations hang in the balance as rebels and revolutionaries trade gunfire with loyalists and tyrants.

Eadric Garrard was raised to believe that as the rightful King of Ansgar, his loyal nobles and fearful subjects answered to his every whim, no matter the cost or consequence. His decision to send his troops thousands of miles away will test that fear, and loyalty.

Raedan Clyve was ordinary until an Elven ritual involving a griffin’s heart turned him into something more. Twenty years later, he still struggles with the magics that rage through his body. His mentor holds him back from his full potential and he faces pressure to find a suitable wife and father an heir.

Hadrian Clyve has picked up where his father left off and works to expand his family’s influence amongst the Ansgari nobility. His aggressive negotiation of alliances and shrewd choice of marriage agreements has earned him respect, and resentment. When his King calls his troops to arms, Hadrian has other things in mind.

After a century of scheming and decades of preparation, Magnus Jarmann is ready to bring his family’s plans to fruition by launching a war of independence that will free his people and return his country to its rightful place among the nations of Zaria. The King’s call to arms creates an opportunity that Magnus cannot afford to miss.

In a war, little is held back; in a revolution, nothing is safe.

Josh is the author of The Cerberus Rebellion and The Hydra Offensive, Gunpowder Fantasy novels set in the Griffins & Gunpowder universe. He is currently working on a new novel set in the same world as well as The Centaur Incursion, Book 3 in the Ansgari Rebellion Series and Loyalty Betrayed, Book 1 in the Liberty Forged Series. He currently works full-time and has an 8-year old and a 4-year old to keep him busy.
View all posts by Joshua K Johnson »

← No One Searches by Tags
Guest Post – Bones of the Earth →